When I heard he is coming, I got excited" - Liverpool captain Jordan Henderson was thrilled by a 2015 arrival at Anfield - SportyHubs.com Liverpool captain Jordan Henderson has opened up on his feelings about the arrival of head coach Jurgen Klopp in 2015.Henderson, 32, has been a regular presence at the center of the park throughout Klopp’s reign at Anfield. He transformed himself into a top deep-lying midfielder under the guidance of the German tactician, registering 13 goals and 26 assists in 267 matches for him.

After Brendan Rodgers was shown the door by the Reds’ hierarchy in the first half of the 2015-16 season, Klopp was appointed as the head coach in October 2015. He, along with Henderson as his trusted captain, has helped the Merseyside outfit lift seven trophies since then.

“None of the things that have happened over the last few years would’ve happened without him.” 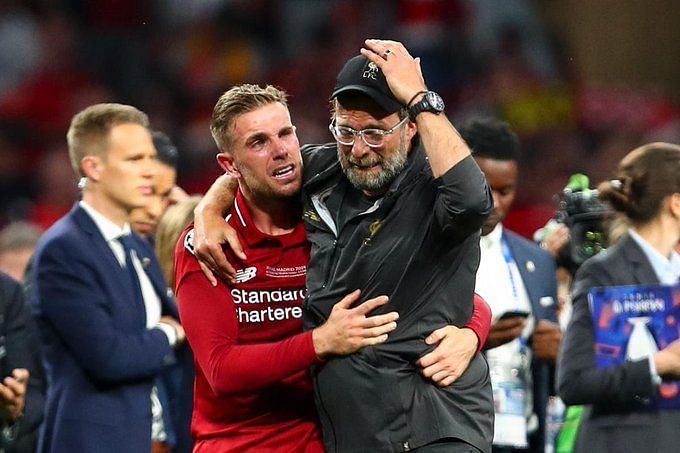 Speaking on Joe Cole Cast, Henderson reaction to the appointment of Klopp as club’s manager. He said:

“I was excited for him coming in. I had watched Dortmund quite a lot and I loved Dortmund, the way they played, their energy.

“They didn’t really have superstars yet in that team, he made them superstars in the end, like [Ilkay] Gundogan, [Marco] Reus and players like that.”

“The way they played, it was incredible. I remember going to the [Santiago] Bernabeu and watching them play in a Champions League semi-final, winning against Real Madrid and they were incredible.”

“When I heard he’s coming, I got excited because I knew the type of football and I felt that suited the way I played, the energy, the high press, the intense football. I loved all that.

“I was excited in one part, but in another part, I was disappointed because I was injured and I couldn’t get straight into it.”

Henderson is currently out on the sidelines with a hamstring injury sustained in a 2-1 win over Newcastle United at Anfield on September 1.

He is expected to be back in action next month.Liverpool’s weekend clash against Chelsea has been postponed due to the state funeral of UK monarch Elizabeth II on September 19. After the international break, the club will lock horns against Brighton & Hove Albion at Anfield in a Premier League contest on Sunday (October 1).

Liverpool trying to get rid of Arthur Melo in January – Reports

According to TuttoJuve, Liverpool are prepared to send on-loan Brazilian midfielder Arthur Melo back to Juventus in the winter transfer window to accommodate a new permanent signing.

Arthur, 26, joined Liverpool on a temporary deal on the deadline day of the summer transfer window. The Reds paid a loan fee in the region of £4 million with an option to buy for £32 million next summer.

However, he has failed to impress manager Jurgen Klopp, who is reportedly looking to cut short his loan deal.