STARTING 11 PREDICTION: Jurgen Klopp to show faith in star who is ‘set to show the world why Liverpool signed him’ - SportyHubs.com Going into a game that looks fairly straightforward on paper, Jurgen Klopp and his Liverpool side are actually heading in under severe pressure.

Two draws and a loss so far this season have left fans and players frustrated.

Already being 7 points off the top of the league and 5 points behind regular foes Manchester City, Saturday afternoon simply must end with 3 points.

With Scott Parker’s Bournemouth coming off the back of two heavy defeats, Liverpool must continue this trend to show their credentials this season.

As was the case ahead of the Manchester United defeat, Klopp has a few big decisions to make with his team.

Three goalkeepers made the match day squad last time out as Harvey Davies and Adrian were substitutes at Old Trafford.

This highlights how thin this squad is in terms of bodies.

Despite this, I expect nothing less than Alisson retaining his starting spot.

Unable to really do anything to prevent either goal on Monday night, the Brazilian is one of a few players to escape the wrath of furious supporters.

A very sloppy and slow start to the season from the best right back in the world has been strange to watch.

Negative body language with slumped shoulders has been a worry to see, particularly with performances being so poor.

While Trent has continued to pick out technically brilliant passes on occasion, defensively he has been nowhere to be seen.

Calvin Ramsay is still out injured and therefore the English full-back will have the chance to play his way into form.

Again, a lack of options almost picks this position for itself.

Gomez struggled at Old Trafford but was still arguably the best performer in the Liverpool back line on the night.

Support from his teammates and centre back partner will be needed for Gomez to recapture his old impressive form.

As with Alexander-Arnold, uncharacteristically poor and sloppy performance has football fans across the globe speaking about the Dutchman.

With a World Cup on the horizon, it has been suggested that van Dijk is playing safe to avoid missing the tournament through injury.

Contrastingly, the 31-year-old may just be suffering a loss of confidence with other poor performances and the club falling short at the end of last season.

There is no doubt he will start this match.

Each passing week consists of louder and louder calls for the ‘Greek scouser’ Kostas Tsimikas to get a runout.

His impressive form last season and a worrying dip in form of Andy Robertson points to maybe rotating for the sake of everyone.

However, Jurgen Klopp has proven to be extremely loyal to the energetic Scot.

I do not expect a change this week but perhaps in the near future should nothing improve.

Arguably the biggest mistake from the disaster that was Monday night is the exclusion of Fabinho.

While Jordan Henderson was struggling to control the midfield or even the ball at times, the man nicknamed ‘Dyson’ should have been there to mop things up.

While the Brazil international was getting splinters, Liverpool’s midfield was getting out run and out played.

This mistake cannot be repeated and I’m sure Klopp will acknowledge this.

The captain was really poor in the previous few games and has maybe shown some limitations to his game.

Seemingly unable to keep up with play at times against United, it was unwatchable at times.

I still believe the skipper has plenty to give the team but he just needs some players back from injury.

When the midfield maestro and Fabinho are both playing behind Henderson, it allows freedom to link up with Mohamed Salah and Alexander-Arnold.

I feel a slight tweak in system may occur against Bournemouth and Henderson could be tasked with a more defensive role until other players are back.

Admittedly his substitution came too late in the game for more of an impact to be had.

Driving at the United defence and making them work is exactly what the team lacked prior to his introduction.

While Harvey Elliott will feel hard done by to miss out on this game, there is a reason behind it.

As stated before, Jordan Henderson can do more defensive work alongside Fabinho and this will allow space for Carvalho to attack.

Havery Elliott himself has claimed that new signing Carvalho “will show everyone in the world why Liverpool signed him” during an interview with The Athletic.

Claiming it is “special” to be reunited with his former Fulham youth teammate, Elliott will be cheering his friend on from the sidelines should he get the nod. 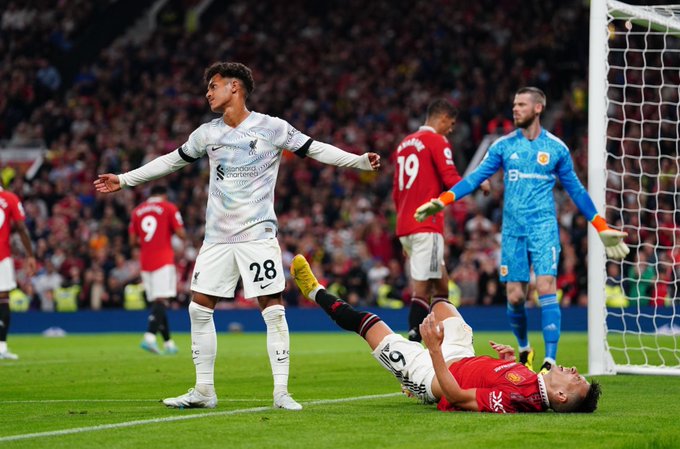 One question mark surrounding the magical winger is his output.

A lot of the hard work and build up is beautiful to watch but the final finish isn’t always quite there yet.

Scoring a wonder goal against Crystal Palace to earn a point for his side has given fans more belief in him to deliver.

The performance against United was disjointed but this was the same across the board.

With a lack of options, Díaz will get the chance to dazzle once again.

At the moment, the Egyptian King is the only likely source of goals or creativity which has worked against him as teams focus all their energy on stopping him.

Chipping in with a couple of goals and an assist thus far, Salah is an absolute certainty to be selected for each game.

Centre forward may be a slight reach here as Firmino appeared to be deployed from a deeper position than anyone the other night.

With a tactical change, Klopp could maybe encourage Carvalho to make runs from his more attacking role to take up space vacated by Firmino.

Taking false nine to a new level, the 30 year old has lacked any goal threat and has been floating aimlessly in each game.

Surely playing closer to the goal will hold Firmino and the rest of the team in good stead.

For the next two games it is almost guaranteed that he will play as Núñez is still suspended and Jota is not expected back into training until the end of the month.