Really good guy as well as an exceptional footballer” - Erling Haaland says Liverpool star ‘may be the best in the world’ - SportyHubs.com Manchester City striker Erling Haaland has lauded Liverpool’s Virgil van Dijk as an exceptional footballer after facing him for the first time since switching to the Premier League.The duo came up against each other when the two sides clashed in the Community Shield last month and the City forward has nothing but praise for the Reds centre-back.

Erling Haaland joined Manchester City from Borussia Dortmund in a deal worth €60 million this summer.

Having proven himself to be an elite goalscorer during his time in the Bundesliga, all eyes are currently on the Norwegian to see how he fares against opposition defenders in the Premier League. The English top-flight is believed by many to be more physical than other European leagues. 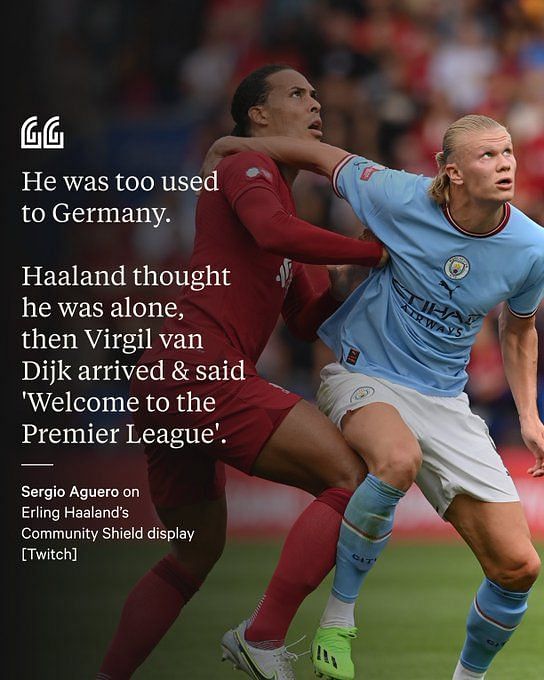 Virgil van Dijk is considered by many to be the finest defender in England at the moment. With the Dutchman and Haaland representing two bitter title rivals, it is natural for fans to expect to see some form of rivalry between the two on the pitch.

However, Erling Haaland insists that it is not a contest between him and the Liverpool powerhouse but two groups of 11 players pitted against each other. The Manchester City star told FourFourTwo:

I’m not sure about that. It’s not me versus Virgil. It’s not one against one. It’s 11 versus 11. I know he and I will be up against each other but I’ll also be against Alisson and the rest of their defence.”

“This is modern, top-class football – it’s about more than good individuals. We have to be great as a team, working together. It’s important not to look at individual battles too much.”

Erling Haaland went on to state that the Liverpool centre-back could be ‘the best in the world’ in his position while also fancying his chances against the Dutchman. He said:

“It’s always nice to face the best and that’s what Van Dijk is. I’ve played against him a few times and he’s a really good guy as well as an exceptional footballer. I like to play against him because he may be the best in the world. But I have scored at Anfield and for Norway against the Netherlands.”