Former Manchester United midfielder Bastian Schweinsteiger believes Liverpool were the better side in the Red Devils’ 2-1 win over their fierce rivals on August 22.A composed Jadon Sancho first-half finish and Marcus Rashford’s fine effort were enough for United to seal a vital victory over the Merseysiders.

Erik ten Hag’s side had kicked off the season with two demoralizing defeats and were much improved against Jurgen Klopp’s side.However, Schweinsteiger believes that the scoreline doesn’t tell the whole story and that Liverpool were the better side.The legendary German midfielder told BBC Radio 5 Live Breakfast:

“I support United, of course, and I’m very happy they won the match.”

“But was it a great performance? I wouldn’t say so. Liverpool were the better team which much more possession. They couldn’t finish their last passes otherwise they would have won the game.

“United did have the right attitude and spirit though. Against the ball they were fighting and running. In my eyes also, the supporters won the match.”

Ten Hag was second-team coach at Bayern Munich whilst Schweinsteiger was part of the Bavarians’ side.

He has touched on the Dutch tactician’s appointment, stating that Monday night’s game is not indicative of the type of football the manager will look to implement:

“They have got a very good manager now and I think he is the right man for the position. But was it the way United want to play football? I don’t think so. That was survival mode.”

The win over Liverpool takes United into 14th place whilst it sends their arch rivals to 16th.Next up for Manchester United is a trip to St Mary’s Stadium to face Southampton in a match where new signing Casemiro could make his debut.

Ten Hag wore a smile for the first time as Manchester United manager following a competitive fixture on Monday night.However, the Red Devils boss isn’t resting on his laurels and believes there is still huge room for improvement.

“That’s what makes me satisfied but it is only the start, we have to keep humble, but I think we can play a bit better if we have a little bit more composure, give an extra pass, we can be much more dangerous, because, as I said, we have good players with good ability, with good spirit and you will act.

“That is what we showed today, in moments, but also when you have to make the game, you have to be better on the ball.” 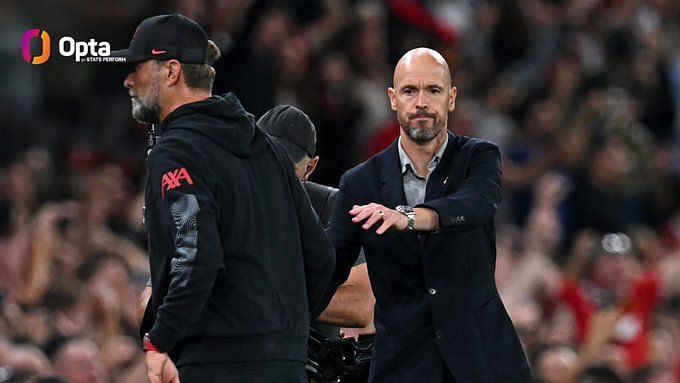 Erik ten Hag is the first Manchester United manager to secure his first ever competitive win with the club in a match against Liverpool. Arrived.