In search of their first win of the 2022-23 Premier League campaign, Liverpool traveled to Manchester United’s Old Trafford for their matchday three appointment on Monday night (August 22). Jurgen Klopp’s men, who were the favorites going into the match, were surprisingly poor on the night, succumbing to a 2-1 defeat at the Theater of Dreams. Jadon Sancho and Marcus Rashford were on the scoresheet for Manchester United, while Mohamed Salah scored Liverpool’s only goal in Manchester.The Reds endured a nervy start at Old Trafford and could have found themselves trailing after 10 minutes of play. Manchester United forward Anthony Elanga got himself one-on-one with the keeper but ended up dragging his effort wide, hitting the far post.

Six minutes later, Old Trafford erupted as Sancho hit the back of Alisson’s net to put Manchester United ahead. It was schoolboy-level defending from the 19-time champions, allowing the Englishman all the time in the world to get his shot away.

Manchester United midfielder Christian Eriksen came close to finding the back of the net from a free-kick in the 25th minute. A fully-stretched Alisson had to make a smart save to parry the ball out for a corner kick. 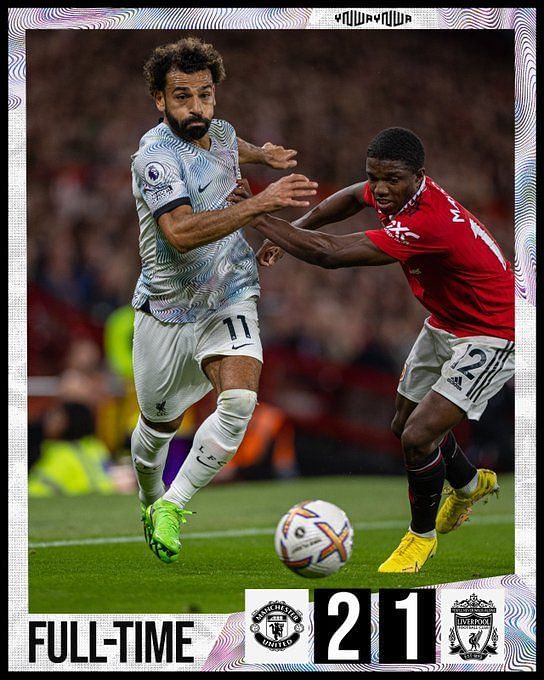 Liverpool came mighty close to getting the equalizer five minutes before the break when Bruno Fernades comically scuffed his clearance and hit Lisandro Martinez on the goal line. The former Ajax man took control of the situation and cleared the ball.

Apart from Luis Diaz, who threatened the hosts with his directness, no Liverpool outfield player impressed in the first half. The opening minutes of the second half were not any better either. Capitalizing on the Reds’ sloppy distribution, Anthony Martial slipped Rashford through on goal and the Englishman made no mistake doubling the hosts’ advantage.

In the 66th minute, in what was Liverpool’s first big attempt of the night, Fabinho met Andrew Robertson’s deep corner-kick delivery with a far-post header. His effort drew a smart save from United stopper David de Gea.

14 minutes later, Roberto Firmino forced De Gea to parry the ball behind for a corner, which led to Liverpool’s only goal of the match. De Gea saved Fabio Carvalho’s attempt at goal but the ball came back into play, falling nicely for Salah. The Egyptian turned the ball in with a low header.

Despite getting a late boost, Liverpool could not press on and get the equalizer, thus extending their winless run in the Premier League this season. In the aftermath of Monday’s defeat, the Anfield outfit find themselves in 16th place, five points behind Premier League rivals Manchester City.

Here are five Merseyside stars who failed to live up to the expectations at Old Trafford on Monday night:

The Reds’ veteran midfielder James Milner started at Old Trafford on Monday, producing a performance that lacked both guile and conviction. The Englishman showed plenty of heart, but United were simply too nimble-footed for the 36-year-old midfield star.

Trent Alexander-Arnold is one of the most highly-rated full-backs in the world. On Monday, he looked like a shadow of his brilliant self, struggling to keep pace with the Manchester United attackers.He was caught out of position for Sancho’s opening goal and failed to make amends (as he generally does) with his attacking contribution. He misplaced crosses, lost possession rather frequently, and committed a couple of silly fouls, one of which (foul on Elanga) earned him a booking in the first half.

Against United, Alexander-Arnold lost three ground duels, ceded possession 23 times, and misplaced seven of 11 crosses. It certainly was not a night to remember for the England international.

Liverpool center-back Virgil van Dijk is seen as a pillar in the Reds’ defense, rarely making mistakes and always alert to impending dangers. Against United, the Dutchman could not showcase the aforementioned traits, looking rather susceptible at the back.Van Dijk was shockingly sluggish during United’s opening goal. He made a half-hearted attempt to block Sancho’s strike, failing miserably. He also lost possession (15 times) rather frequently and came up second best in both his ground duels.

Given how brilliant he has been for the Reds since joining from Southampton, Van Dijk’s display against the Mancunians was undoubtedly disappointing.

Liverpool skipper Jordan Henderson was one of the team’s worst performers on Monday night. He was lackluster in possession, rarely made inroads into the opposition half, and lacked the calmness he is renowned for.

Henderson’s poor touch for that Rashford goal. Incredible stuff. Just pure & simple technical deficiencies as a midfielder. It was also his give away which led to Mitrovic’s 1st goal on matchday 1. Klopp’s excessive loyalty to certain players is being brutally exposed.

In the second half, Henderson cheaply gave the ball away to Martial, who looked up and spotted Rashford’s run. He sent the Englishman through on goal and he made no mistake slotting it home, past Allison. Apart from making a blunder for the second goal, Henderson also misplaced three long balls and ceded possession 10 times.

With Darwin Nunez suspended and Diogo Jota out with a hamstring problem, Roberto Firmino was deployed as a center-forward against the Red Devils. Unsurprisingly, Firmino dropped too deep at times, vacating the central area in front of the United goal.